A Bulli For The All-Electric Future: World Premiere Of The New ID. Buzz

Volkswagen Passenger Cars and Volkswagen Commercial Vehicles are giving the new ID. Buzz and ID. Buzz Cargo1 their world premiere today in Hamburg. With Europe's first all-electric bus and transporter range, Volkswagen is providing yet another solution to sustainable and CO2-free mobility. The ID. Buzz comes with the latest ID. software and sets new standards in its segment with the latest systems and functions for safety, comfort and charging.

A BULLI FOR THE ALL-ELECTRIC FUTURE: WORLD PREMIERE OF THE NEW ID. BUZZ

Volkswagen Passenger Cars and Volkswagen Commercial Vehicles are giving the new ID. Buzz and ID. Buzz Cargo1 their world premiere today in Hamburg. With Europe’s first all-electric bus and transporter range, Volkswagen is providing yet another solution to sustainable and CO2-free mobility. The ID. Buzz comes with the latest ID. software and sets new standards in its segment with the latest systems and functions for safety, comfort and charging.

Ralf Brandstätter, Chairman of the Board of Management of Volkswagen Passenger Cars: “The ID. Buzz is a genuine icon for the electric era. A car, the likes of which only Volkswagen can build. In the 1950s, the Volkswagen Bulli stood for a new feeling of automotive freedom, independence and great emotion. The ID. Buzz picks up on this lifestyle and transfers it into our time: emission-free, sustainable, fully networked and now ready for the next big chapter: autonomous driving. With this car, we are bringing together the core themes of our ACCELERATE strategy in one product for the first time.”

Carsten Intra, Chairman of the Board of Management of the Volkswagen Commercial Vehicles Brand, adds: “Both versions of the ID. Buzz are pioneering in terms of their sustainability: their manufacture and shipping has a carbon-neutral footprint. We are also using recycled synthetic materials and the interior is completely free of any real leather.” He continues: “The ID. Buzz will also be used for future autonomous mobility concepts such as ridepooling – an e-shuttle service of Group subsidiary MOIA that can be booked via an app. The electric Bulli is thus also a part of the future of inner-city transport.”

As is the case for all the models in Volkswagen Passenger Car’s ID. family, the ID. Buzz, which is built by Volkswagen Commercial Vehicles in Hanover, is also based in engineering terms on the Group’s Modular Electric Drive Kit (MEB). The world’s first scalable mass production platform for all-electric cars provides the cross-brand basis for all sorts of different models and segments. Its architecture allows for an evolutionary further development of software and technology, which not only benefits new models such as the ID. Buzz, but also models that have already been delivered, by means of over-the-air updates. 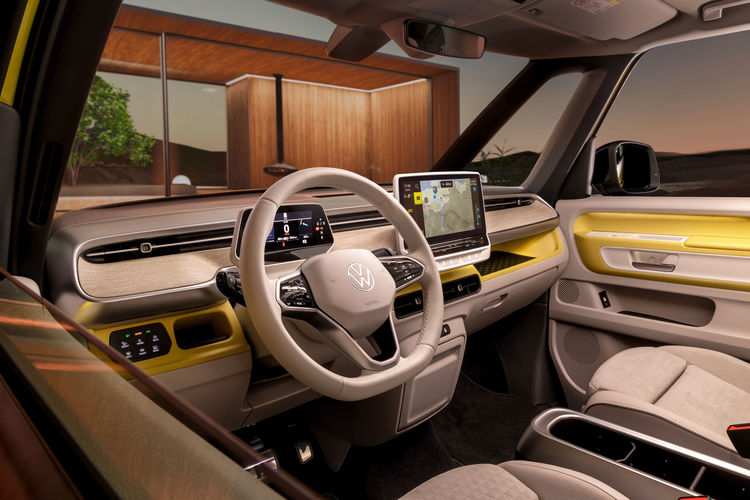 The new model line’s assistance systems perfect ease of driving and safety. Included as standard in the ID. Buzz and ID. Buzz Cargo is the ‘Car2X’ local warning system, which utilises signals from other vehicles and the transport infrastructure to spot hazards in real time. Also included as standard: the ‘Front Assist’ emergency braking function and, in the MPV, the ‘Lane Assist’ lane-keeping assistant. With new software, new assistance functions are also making their way into the ID. family. Available as an option is ‘Travel Assist with swarm data’, which facilitates partially automated driving across the entire speed range and, for the first time, assisted lane-changing on the motorway. Also new: the ‘Memory Function’ for automated parking on a previously saved route.

Up to 170 kW charging power, Plug & Charge and bidirectional charging

The ID. Buzz and ID. Buzz Cargo are launching across Europe with a 77 kWh battery (gross energy content: 82 kWh). It provides current to a 150 kW electric motor, which – as the flat engine once did in the T1 – drives the rear axle. The position of the battery, integrated deep down in the sandwich floor, and the lightweight electric drive system result in a good distribution of weight and a low vehicle centre of gravity. Both factors optimise the handling and agility. The lithium ion battery can be charged from wall boxes or public charging stations using 11 kW alternating current (AC). Via a CCS plug connector at a DC rapid-charging station (direct current) the charging power increases to as much as 170 kW. When charged in this way, the battery charge level rises from 5 to 80% in about 30 minutes. Using the latest ID. software, the model line will also offer the ‘Plug & Charge’ function in the future. Via this function, the ID. Buzz authenticates itself at compatible DC rapid-charging stations via the charging connector using the ISO 15118 standard. It also exchanges all necessary data with the charging station in this way – an added convenience. Bidirectional charging enables the ID. Buzz to feed unneeded energy from the battery into the customer’s home network (Vehicle-to-Home). The power transfer and communication take place via a special DC bi-directional wall box. 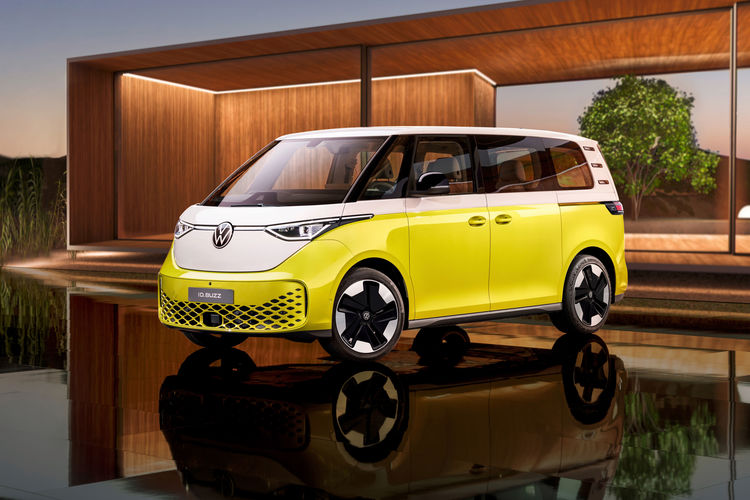 Iconic design: The ID. Buzz is the new face of a sustainable form of mobility

The visual frame around these future-oriented technologies is formed by the unique design of the ID. Buzz. “The T1 – an icon of the 1950s – enabled people to gain mobility and freedom. With the ID. Buzz, we are transferring this T1 DNA to the present day and thus into the era of electric mobility,” says Jozef Kabaň, Head of Volkswagen Design. “The ID. Buzz brings a lot of sympathy and proximity to people back to the road,” the chief designer continues. And it is the proportions that make the ID. Buzz so unique. Kabaň creates a direct link with the original classic vehicle: “In the T1 you are practically sitting on top of the front axle – there’s no front overhang. For all its safety relevance and technology, the ID. Buzz has super short overhangs.” The designer sums up: “The ID. Buzz is timeless, sustainable and yet also extremely functional – that makes it unique.” Another feature that has always been typical of the model line is the iconic front with its V-shaped front panel between the charismatic LED headlights. That goes for the optional two-tone paintwork too. 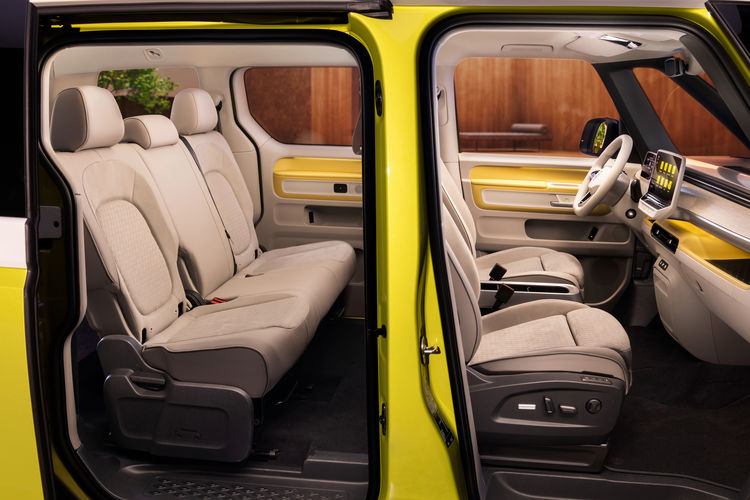 Thoughtfully designed, spacious interior for a life on the move

Buzz drivers and passengers experience the new Bulli feeling in a spaciously designed interior. Typically Bulli: the layout is very clear, the concept well thought through and utilisation of space optimal. In the lounge-like, friendly ambience of the MPV version, five people have ample room for travelling and for their luggage (1,121 litres of capacity). If the second row of seats is folded down, the load capacity increases to up to 2,205 litres. Two or three seats up front, as the customer desires, and a fixed partition separating off the 3.9 m3 cargo space are distinctive features of the ID. Buzz Cargo. The zero-emission cargo version can take two loaded euro pallets, loaded in transversely.

One feature of the ID. Buzz and ID. Buzz Cargo is the long wheelbase of 2,988 mm, roughly the same as that of the current T6.1. The length of both versions is 4,712 mm. By virtue of what, in relation to the overall length, is a very long wheelbase, optimal use is made of the vehicle footprint. Including roof aerial, the two versions of ID. Buzz measure, dependent on specification, 1,937 mm or 1,938 mm in height. At 1,985 mm, the new model is 81 mm wider than a T6.1. The turning circle of 11.1 metres, meanwhile, is unusually small.

The first MPV with the drag coefficient of a car

Design already followed function in the case of the T1, the first Bulli. Form follows function – this central tenet of automotive construction also applies to the design of the ID. Buzz. The iconic clear forms are accompanied here by outstanding aerodynamics: the ID. Buzz has a drag coefficient of 0.285 – 0.29 for the ID. Buzz Cargo. That reduces energy consumption and increases range.

The ID. Buzz model line is being produced by Volkswagen Commercial Vehicles at its main plant in Hanover. The majority of the electric drive system modules being supplied to the plant for this purpose will also be made in Germany to the highest quality standards – in this case by the Group’s own Volkswagen Group Components division. Since 2022, the Hanover plant has been one of the Group’s high-tech locations for the production of all-electric vehicles. It is also the case across the board that Volkswagen Commercial Vehicles has begun a transformation process in order to be able to offer more electric models in the future. In Hanover, where once a Bulli model line used to be produced, what is being created today in parallel is a three-pillar Bulli product – two of them electric. The ID. Buzz and ID. Buzz Cargo leave the production line as zero-emission vehicles – they bear witness to a decision on mobility, with which their owners are able to counter the climatic challenges of our time. 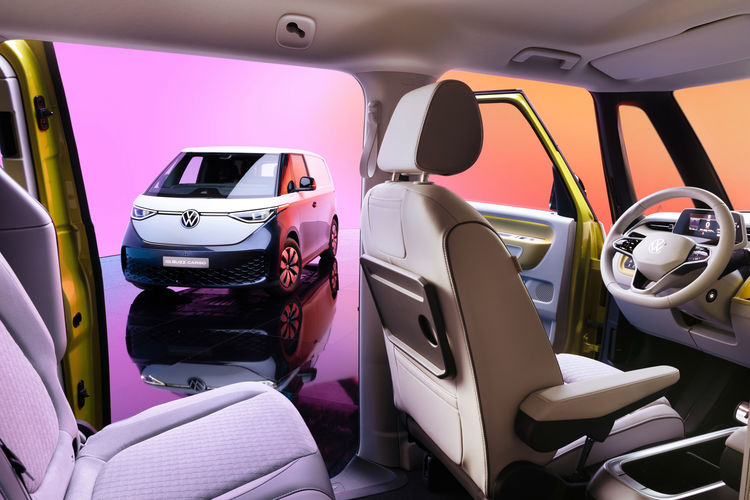 European pre-sales start in May, market launch in the autumn

The ID. Buzz and ID. Buzz Cargo will come onto the market in the first few European countries this autumn. Advance sales are due to start in May. With the ID. Buzz, Volkswagen of America will also be initiating the comeback of the so-called microbus in the USA and Canada.