As reported on GreenCarCongress the range extender system has been developed by Bosch Engineering GmbH together with VDL Enabling Transport Solutions within the scope of EU-funded GiantLeap project. Fuel cell stacks are provided by Ballard Power Systems.

UPDATE JUNE 8TH 2020: the four hydrogen powered buses from VDL stats operations between Rotterdam and the Isle of Goeree Overflakkee.

Numerous hurdles had to be taken, but today we could finally celebrate that next monday, four hydrogen powered buses supplied by dutch manufacturer VDL will commence operations between Rotterdam and the Isle of Goeree Overflakkee. The buses are of an innovative concept: a range extender fitted with a fuel cell does provide electricity to the batteries of the electric bus in front of it. Such a concept has not been seen in the world before.

VDL has already delivered over 100 battery electric buses to Connexxion, which belongs to Transdev group and it’s in charge of the concession that cover the nearby of Schiphol airport (concession Amstelland-Meerlanden), where the first large e-bus fleet in Europe started operation in 2018. Connexxion will also receive as many as 156 Ebusco e-buses for the concessions Amstelland-Meerlanden and Haarlem-IJmond, following a tender won in late 2019.

But now it’s time for the small batch of hydrogen buses coming from VDL Bus & Coach. After a short training period for drivers, VDL hydrogen buses are to be deployed on R-Net line 436. These four vehicles are the first hydrogen buses to be put into service in this concession. Connexxion purchased them a few years ago, the carrier highlights. Commissioning was delayed due to complex laws and regulations regarding the use of hydrogen buses, among other things.

The bus drivers and mechanics who will be working with these buses have now obtained driving license E in addition to driving license D, a condition for being allowed to hit the road with this special configuration, Connexxion states. Indeed, VDL hydrogen buses, named VDL SLF-E H2, are equipped with a trailer that houses the H2 technology. The advantage of this choice is that the extra weight of the H2 equipment has not been at the expense of the number of passengers to be transported. The number of passengers is therefore at the same level as that of a comparable diesel bus, Connexxion states.
With a full tank, these buses can travel about 350 kilometers.

Refueling is done at the hydrogen station of Air Liquide in Rhoon. This is along the route of line 436. In 2021, the number of hydrogen buses in Hoeksche Waard – Goeree Overflakkee will be expanded thanks to the purchase of 20 new buses from Solaris. 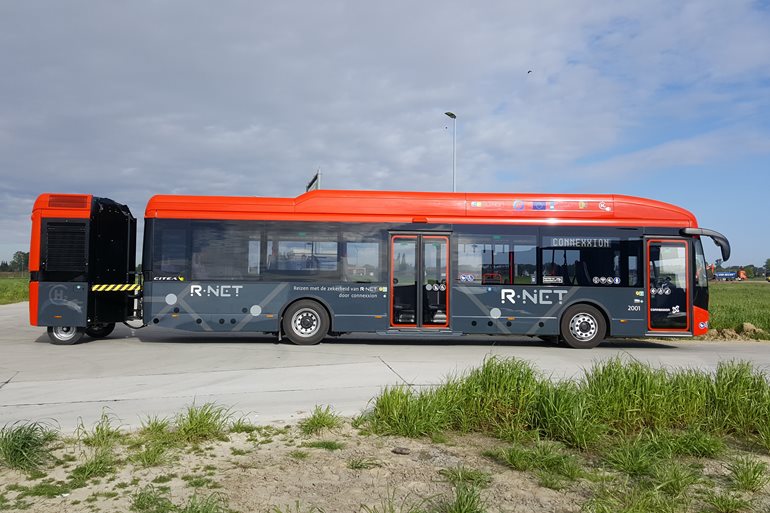